Xevious is very good. The game is a foundational work of the vertical shooter genre, with a healthy sprinkle of the cryptic riddle-based depth which would serve creator Endou Masanobu so well in the later Tower of Druaga. It also managed to receive two separate, good-to-great 8-bit conversions for the Famicom and Atari 7800, not to mention noble unreleased attempts on earlier Atari platforms. The success of Xevious on the Famicom alone was probably grounds for Namco to consider providing a budget for a sequel or two.

By this point the notion of developing sequels was nothing new. More than half a dozen of Namco’s prior games had warranted sequels by the late summer 1984. Most of these sequels skewed towards gentle iterations, such as the jump from Galaxian to Galaga or the addition of tracks between Pole Position and Pole Position II. A few of these sequels, however, fell farther from their proverbial trees. Thus far the Pac-Man franchise has been the progenitor of most of these radically different sequels, doubly so when you factor in Midway’s ill-conceived adventures with the property. Herein we shall consider the first two canonical sequels to Xevious, which split the difference between iterative and explorative sequels.

According to Japanese Wikipedia, the main issue that Namco had with Xevious was that people were too good at it. Players were rolling upon the cabinet within the first month of release and scoring north of 10 million points, blowing up the classic arcade success formula of a quarter/100 yen coin per three minutes or so. Endou Masanobu had already fiddled with the balance of Xevious when it was released in certain parts of Europe, where arcades were even cheaper than North American and Japanese counterparts, in an attempt to make the game more profitable. Super Xevious, therefore, was largely born out of a desire to extract more money from gamers. How’s that for grim?

What surprised me the most about Super Xevious is just how unchanged the game is at its core. The enemy count seems a little higher in places, and there are a few new foes to be found. The game honestly feels less like a bright, shining new arcade cabinet than it does the next level pack for the original game. In the case of something as fundamentally good as Xevious that might not be the worst news, but I certainly would have hoped for something a little more notable. 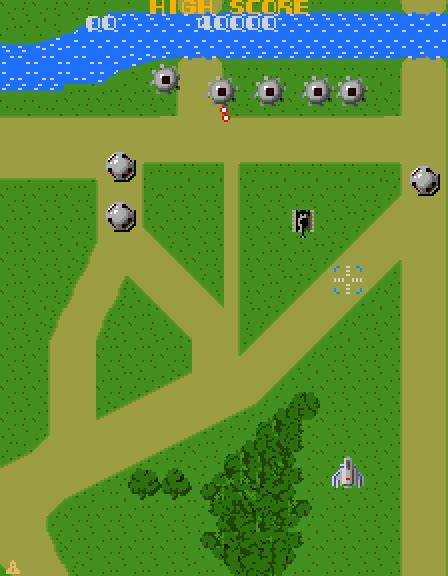 The mechanics you know and love are all here. The player is tasked with shooting enemies out of the sky while bombing ground-based targets. It was all familiar enough to me that I actually defeated Andor Genesis cleanly on my first attempt, something I’ve only done a handful of times in base Xevious after dozens of attempts (yes I am a scrub player). One will eventually discover the cute addition of new foes like helicpoters and even Galaxian ships as enemies further into the game, but the latter come along with the even “cuter” effect of resetting the player’s score to zero if they are destroyed.  If it weren’t for a very notable increase in difficulty past the first Andor fight, this would basically be Xevious++. However, the difficulty spike is does happen and likely served its purpose of kicking players off the machine at roughly a profitable arcade interval.

When I was first putting together the NamCompendium, I was initially tripped up by the fact that there is a very similarly titled game for the Famicom. Upon further research, including playing both, things became much clearer. In fact, his game has no direct relationship to Super Xevious: GAMP no Nazou for the Famicom. This project will explore the differences in full in due course. As a preview, one of the main differences between Super Xevious for the arcade and GAMP no Nazou for the Famicom, is Super Xevious at least resembles a fair game that wants you to have a good time and feel good about yourself while playing it. GAMP no Nazou just wants to make you sad.

Similarly titled Famicom games notwithstanding, Super Xevious was never converted to a home console. Instead, it has one of the strange post-release histories of all of the games covered thus far. Super Xevious has seldom made the top billing anywhere, due in no small part (I imagine) to feeling so inessential compared to its forebear. Instead, it has been a dubious bonus in a handful of packages. The first of these was Namco Classics Collection Volume 1, a Japan-only arcade release which compiled three golden age Namco titles (Pac-Man, Mappy, and Xevious) into one cabinet. Each game was effectively ported to a new hardware platform, and each also includes an “arrangement” mode which have seen spotty reissues over the years themselves. Whereas these are selectable from a top level HUD, the Xevious selection has three choices: original, arrangement, and Super Xevious. Why you would choose Super Xevious over the other two is anybody’s guess.

Both this arrangement and Super Xevious were then included in Xevious 3D/G+ for the Sony PlayStation, and it is through this collection that one may most easily access Super Xevious today. Thanks to the dual wonders of backwards compatibility and digital distribution, Super Xevious is playable on the entire family of PlayStation systems bar the PS4 and PS5 (a position that was clarified during the very long gestation period of this edition).

The “included as a weird hidden bonus thing” pioneered in Classic Collection 1 was cribbed by none other than M2, who surreptitiously included Super Xevious in the fantastic Namco Museum DS. The amount of love M2 poured into this collection probably warrants your time even without this particular game in its favor.

Super Xevious, and even Xevious the First, are not necessarily “thinking man’s games”. Grobda makes them look like absolute geeks. Xevious and its ilk are about skillful flying, exploring the landscape for hidden Sol Towers, and braving a hailstorm of bullets while you pilot your way to the weak point of the dreaded Andor Genesis. Grobda, by comparison, is brick simple. I love it.

The “Xevious is a nerd” point of comparison can be taken a step further even, because Grobda is kind of a jock. Literally so, when you consider that one of the underlying conceits of the game is that it takes place in a fictitious tank-based sports league. The player is (at least temporarily) a member of the National Battlers Association, a league which the game goes to some lengths to underscore shares an acronym with a US-based basketball organization. You drive a tank, and your goal in each level is to defeat an array of roughly half a dozen competitive tanks. You do so with one clean shot, exploding your foes into a satisfying cloud of fiery death which leaves a hollowed out pile of molten slag in its wake. But lo! for you are as vulnerable as these foes; one clean shot on you and you are equally as dead.

The wrinkle here is that, unlike the starting foes, you are given an amount of shield which you can use by holding down a secondary button. This shield is finite, but does slowly recharge. This shield, used in tandem with the little bits of metal obstacle peppered throughout each level, combine into something which does start to feel like a cover shooter. It’s not quite there, mind. Cover shooters get some chunk of their mileage through at least partially obscuring your foes in three dimensional space. Here, the player always has “perfect information” about enemy whereabouts, allowing for a different sort of satisfying mechanic: ambushing the piss out of enemies as they round corners. Pulling this off, particularly in a manner which causes one tank’s blast radius to catch a second (and a second radius a third!) is not only incredibly satisfying, but also the source for bonus points in this game.

This does require a little bit of forethought, however, as the tank is only able to fire forward and does require a non-zero amount of time to round itself in a given direction. It is also complicated by later enemies, starting about half a dozen battles into one coin’s worth of play, which themselves have shields which require multiple shots to deactivate before landing a killing blow. Furthermore, there’s also the blast radius left by exploding enemies: it can destroy other foes, which in turn explode themselves and potentially begin a chain of destruction which racks up bonus points with each additional foe. But this radius can also destroy the player, which necessitates a certain amount of caution. It is a straightforward premise and a simple game to pick up, but with precisely enough depth and dynamism to keep things from feeling repetitive.

There’s also the presentation, which is great. Plenty of chunky mechanical tank noises, great explosions, and even another NamCompendium First! Grobda is the first game covered to use a DAC to handle spoken lines as samples. The cabinet encourages the player to “GET READY” prior to rounds, using the line about a year before Space Harrier was released with its own more celebrated use of the same prompt. The sprites themselves being rather small won’t win it any visual effects awards, but in the service of allowing for a large play field with several enemies on screen it works well enough.

Endou was on some real shit by this point. Grobda was not an enormous hit, at least according to Hardcore Gaming 101, but it’s a very fun and very different work from Xevious and Druaga.

Like Super Xevious above, Grobda never did get an official console conversion. It did make its way to domestic computer platforms of its era; for more on these, I would refer you yet again to the well done HG101 article on the game in question. Grobda’s post-release trajectory has otherwise been a below-average one. It appeared in Namco Museum Volume 2, making it playable on PlayStation platforms much the same as Super Xevious and other NaMuVo compiled games. It also snuck onto Namco Museum Virtual Arcade as a disc-only title with no achievements, frustratingly locking it to the Xbox 360.

The most recent inclusion Grobda had was in the North American exclusive Namco Museum Megamix for the Nintendo Wii. Not only is the game included, but it also received its own Remix/arranged mode. Namco could have probably released Grobda Remix as a basicCombat-adjacent tank game, comparable even to the included tank mode in the recent Clubhouse Games for the Switch. But it’s actually a pretty fun, if garish looking, spin on the arcade game. Reasonably fast, largely the same strategic considerations. It’s alright!

Believe it or not, that’s it for 1984. Five games in total, four of which were sequels to existing properties. Between Druaga no Tou and these two Xevious sequels, it was absolutely Endou’s year at Namco. It would also be the slowest year Namco would ever have again. 1985 would see the tenuous beginning of Namco’s original, non-arcade conversion games on the Famicom, a development which would continue with explosive growth for nearly a decade hence on that platform alone. The next edition of the NamCompendium will consider Dragon Buster, aka the one that looks a bit like Zelda II. Until then, Happy Belated New Year!